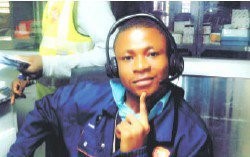 Ogumilade Michael’s mother is a petty trader and his father is a security guard. His parents struggle to af ford secondary education for him but were unable to go further.

‘‘Due to financial constraints, I had to travel to Ado-Ekiti in Ekiti state to live with an uncle with the hope that he would sponsor my tertiary education.’’

Nonetheless his plans failed and Ogumilade was left with no hope to further his education.

Ogumilade returned to Lagos to live with his parents, pick up a trade, and hustle. After 4 years, he finally got to know about IIT through a secondary school friend and classmate that by chance checked on him.

Ogunilade was offered admission to IIT to study Electromechanics but his parents could not pay the tuition fee.

“There was no way my parents could get the money, I told myself. We came to the school and explained our predicament and we were referred to the IIT revolving fund.”

Ogumilade Michael successfully completed his In- Company-Training at Glaxosmithkline (GSK) and graduated August 2015. Currently he works at Rite Foods as a technician.

I had some troubles initially with the fees, but received a scholarship grant, and so I made it; I finally made it to IIT.